Sabre wrote:I think my brother might be low key into furry stuff. He's brought it up a few times in conversation now. I honestly can't tell if he is or not, mainly because he findsaid a way to end it on a non-positive note. Though he did use the term fursona to explain something. Is that a term the general public uses? Or no?

I don't know what to do next or what to think

I would say the term "fursona" isn't used casually. The only people who tend to use it tend to be people who are into furry culture or /b/ on 4chan. To people outside the loop it tends to be under negative context. I imagine if he's brought it up on his own accord he's probably a closet furry. I would consider myself outside the loop as I'm not a furry myself but I enjoy the art and roleplay as one, just not down for fursuits myself.
Soooo... I'm doing reviews now! http://doeadeert.tumblr.com/

"Oh bliss! Bliss and heaven! Oh, it was gorgeousness and gorgeousity made flesh. It was like a bird of rarest-spun heaven metal or like silvery wine flowing in a spaceship, gravity all nonsense now. As I slooshied, I knew such lovely pictures!" Alex (Malcolm McDowell)

Controversy is the seeds of change and enlightenment. The fruits we harvest today will be the compost of tomorrow.
Top

Snooping people's profiles and looking at everyone's interests and hobbies and wonder who really is who they say they are...paranoia

Its all in the wrist

Emzy wrote:Snooping people's profiles and looking at everyone's interests and hobbies and wonder who really is who they say they are...paranoia

I did look at your's earlier...was thinking about PMing you

Its all in the wrist

That pup is so adorable...


In other news, I may have just started a horrible argument about religion in one of my online classes. Awe, the result of taking religion classes and then having someone in a sociology class try to spew ignorance. Discussion posts, the one requirement that can be "ugh" worthy or

Awwww Man!!!!
DAMN!!
Our little old lady/housemate was supposed to go to Arizona this weekend. She just got a call from her daughter........they are no longer going.


See the dragon's share of my artwork, here: http://www.furaffinity.net/user/eloeelwe/
Or here: http://eloeelwe.deviantart.com/
Top

Open for PMs and stuff 'w'; Chatting is fun!
Top

Zaphora wrote:Lol XD it's ok I get it I ended up spending a 75$ gift card on Skyland toys xD for my nephews video game xD

Oh my, that is very selfless '3' Iunno if I have that in me right now
Open for PMs and stuff 'w'; Chatting is fun!
Top

Saw this trailer...OMG I am laughing so hard.

Oh god, that's awesome XD
"Now these are the laws of the jungle, and many and mighty are they;
But the head and the hoof of the law and the haunch and the hump is—Obey!"
- Rudyard Kipling, The Law of the Jungle

Well I fenced with a large razor and my twin dueled me with an xl cole xD god it was hilarious I won... X'D

Ohh I need this in my life. Lol.

What's on my mind right now:

*What we're going to have for dinner
*Wondering how my boyfriend will dress me up for tonight
*Work
*How badly I want to eat the tapioca pudding I made
New Discord server for the discussion of toys with a moderated secondhand section. Silicone Soirée
Top

I didn't get into UMD (Maryland), so now I'm waiting on Georgetown and I'm very anxious about it. I can't stand the wait and I feel sick at thought of not being admitted and I don't know what I'll do if I'm not admitted. I really don't, and I feel very miserable. I have no other options. I applied to four programs and 3 have already rejected me; that was the same deal last year (well, 4 rejections and 1 admission). I'm also doing a shitty job of distracting myself from thinking about it. I know there's nothing I can do about it, and so I feel very helpless and hopeless, and I don't know what to do. I want to think that my worries might be for nought, but I don't know.

I was admitted into Georgetown last year, but I wasn't given any funding, so I turned them down. I wish I hadn't done that. I already have a lot of student loan debt and I seriously doubt I'll ever pay it all off, so if by some miracle I'm admitted I'll attend regardless of funding or lack thereof. I also have no idea if my previous admittance will make any difference one way or the other. I emailed one professor whom I've been emailing with before regarding the program (I'd be working with him if I were to attend) and after I submitted my application I sent a polite email explaining my concerns. I was worried that my having declined last year due to a lack of funding would negatively impact their decision and I reassured him that if I were somehow admitted again I would attend regardless. He said that I wasn't being rude (something apologized for in the email) and that he understand and he said he was looking forward to my application again. So I like to think that he wasn't just humoring me. When I had thought I was going to attend, he said he was really looking forward to working with me. I can only hope he still feels the same and that it will count in my favor. Ugh. I feel so nervous and helpless and everything. Sorry for unloading all this.

Decided to try my hand at Dishonored since it's a been a good while since I last tried playing it. I say try because I'm utterly shit at games involving stealth. I know I don't have to be stealthy in Dishonored and that I can still get a lighter ending even with killing people. I'm just trying to avoid going all out with high chaos and all. It's not going very well so far. I tend to go for fantasy oriented RPGs and ARPGs, so Dishonored is a slight step away from that. First person point of view makes me feel sick until I get used to the game; even the Portal games do it to me at first if it's been a while since I've played them. So yeah, my first instinct being to attack and not worry about stealth is a problem with Dishonored and something I need to unlearn before I progress much further in the game. I'm still in the sewers right now; had to stop because I was feeling sick (I still don't feel too great).
31/Asexual/Genderfluid (biologically female).

No college for a little while, really needed it cause I flipped out and stormed out the area and onto the balcony... I was a ticking time bomb to begin with. Then got told off for running off...

Need to arrange a doctors appointment, hopefully really soon. Period pains. Nothing has been helping, last thing on the list is contraceptives but it's been making me paranoid, I have very severe Emetophobia and I read other's experiences, some get nausea. Being that the tablets do it's job, reason why. Yet it makes me freak out cause even the slightest hint will make me freak out. So I will have to talk it over with my doctor, see what chances and everything. Bad enough when someone has a coughing fit in class makes me think they are going to be ill... makes me panic.

Well got to wait three weeks for an appointment maybe.

Well back to slowly munching biscuits and drinking water while playing games.
Top

Hidden Content
This board requires you to be registered and logged-in to view hidden content.
Name: Fenrisulfr, 26/M/PM's welcome.
► Show Spoiler
http://www.furaffinity.net/user/fenrisulfrwolf/
Top

Tumbleweed apocalypse going on here thanks to the wind and dryness. 7 feet of pokey dry weeds in front of your door anyone? 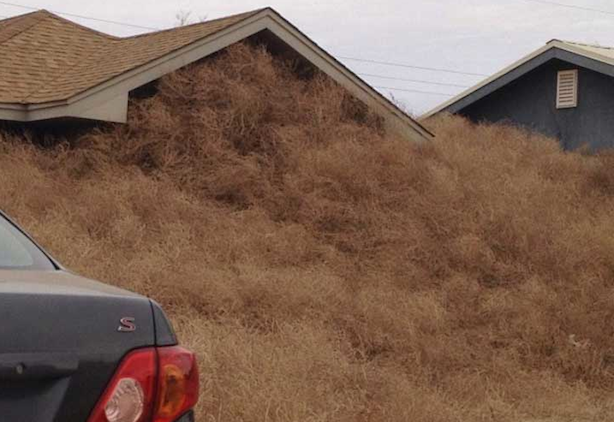 tumble weed is one of the most hilarious plants xD
One happy tear for a good friend.
Top

I knew that. The jackass can kiss my ass lol. I bet they weren't even Russian! The only thing they are good for is making tumbleweed "snow"men in the winter. Its tradition.

A friend of a friend used to make her living on selling tumbleweeds on eBay though. Lol
Female Taken Heteroflexible Hobby Dog Trainer
Top

wolfstardobe wrote:I knew that. The jackass can kiss my ass lol. I bet they weren't even Russian! The only thing they are good for is making tumbleweed "snow"men in the winter. Its tradition. Users browsing this forum: No registered users and 14 guests