Want to see all the sexy, sexy artwork we've made for Bad Dragon, or post up your own? Take a look in here!
Forum rules
Post Reply
178 posts From the depths of the sea and swirling undertoe springs forth a superhero the likes of man, nor fish, nor dragon has ever seen before! Aquadragon!

I thought Spritz would make a cute Aquaman so I went with it ^q^ and whats a BD contest without a giant dragon cock rockin' out for the world to see!

That Spritz art should be the new product image... Haven't had any interest in the model since the redesign until I saw that beautiful work!!!

From the depths of the sea and swirling undertoe springs forth a superhero the likes of man, nor fish, nor dragon has ever seen before! Aquadragon!

I thought Spritz would make a cute Aquaman so I went with it ^q^ and whats a BD contest without a giant dragon cock rockin' out for the world to see!

Really dig your design so much, I love your coloring a lot it looks really nice. I like this design of Spritz a lot more than the actual product page, he looks more like a sea monster here. Very creative and very well executed!
Top

Django wrote:I'm done with my fiction submission. Apparently it gets longer in google documents for some reason. Can we get an official notice when our work is submitted to the contest? I feel that might make people breathe easier. And because I am atrocious at titles I'm just going to call this:

For Want of a MacGuffin
https://docs.google.com/document/d/1NWW9saofzmETAEvsew2osi6ZWvujlfsrJ3-jFdhKHnQ/edit

After submitting my own fanfiction story, I read through the others and yours was by far my favorite

But if I don't, I hope you do.
Writer and vector artist!

Arianfis wrote:After submitting my own fanfiction story, I read through the others and yours was by far my favorite

I think there's gonna be a real slobberknocker of a showdown in the voting process with all this good stuff floating around here!
Top

Arianfis wrote:After submitting my own fanfiction story, I read through the others and yours was by far my favorite

I think there's gonna be a real slobberknocker of a showdown in the voting process with all this good stuff floating around here!

Indeed! Between staff voting and the general forum voting, t'will be quite the interesting one. I wasn't around for the last photoshop competition, but could someone who was tell me if you could see the results of voting during the voting period? Or did you have no clue until it was announced?
Writer and vector artist!

Question: Can I submit more than one picture for the contest?
Top

Sorry this is in so late. Would have loved to do more, but work's been kicking my ass something fierce over the last few weeks.

In summary:
Excessive innuendo at the convention.
Introducing our heroes.
An evil interruption/to the bat cave!
Hatching a plan.
Fight the good fight.
Homoerotic showdown.
The moral message.
Say what?


And I love how people have posted just as many villains as heroes.
Mwuhahaha!

“Now take your drawers off.. and work your legs!”
(Based on the Dragon Island Logo)

Might try and slip one more photoshop in under the deadline. We'll see..

Tried my best, was fun working on it

Hey Everyone! My post is kind of a twofer here.


I've written a Fanfiction for it which can be read here >> http://www.furaffinity.net/view/17153335/ #BDsuperherocontest

Or here on GoogleDocs : https://docs.google.com/document/d/1F2V ... sp=sharing

In the spirit of this being a comic-themed contest, I kept the story short and to the point. It appeals to the reader visually and with plenty of action to keep you enthralled. Heck, this could be a one-shot comic ;3

Be sure to read the story to find out more.

I present to you the first pictures for the original art category. (I have more pics of him for the contest that are different than this, but don't know if I can submit more than one for the contest)
This a full 3D model of Duke. I'll let everyone guess the reference of this photo for fun. Enjoy! Featuring Natascha and Razor because I love me some cute doggies.

I definitely made an account on the forums just to enter this. (Hi everyone!)

So after spending most of yesterday wearing down my last two pencils (the cat likes sticks and keeps running off with my pencils) and having seemingly no rubber or sharpner in the house. This morning it's nomming breakfast as fast as I can

downing a coffee, running to the shops, then back home to scribble as fast as I can until the deadline...

Posting entries here is ok right? Are we meant to tag which category we are entering? Cos I'm drawing mine in pencil (maybe inking it too not sure yet) but its using the description of the photoshop category (drawing favourite BD charecter as a superhero) but I'm not sure if this should be in the original category cos I'm using pencil (but it's not an original charecter)? I'm doing Crackers as Iron Cockertrice - c'mon crackers needs some more luvin'

Really amazing entries. Great ideas, everyone! :3
-
Never fear - Iron Cat is here!
Being neither iron nor technically a cat, Icee is ready to defend the earth from evil.
Like any decent hero, he quickly grew a fan base once he began his heroic endeavors. The creature fed off the attention, thrilled that he was not only accepted but celebrated. He was happy, and more importantly, he was making a difference.

But it wasn't enough. His body couldn't fight as hard and as fast as his mind wanted to.
A few rough defeats and the world shut him away, already forgetting the Chimera. There were better heroes.

That wouldn't be the end of Apollo. He wouldn't let it be. He couldn't go back to being so alone, so.. unneeded.
When the world started to turn to evil, he took action. Whatever was necessary, the cat would do it to become the warrior he knew he could be. He took action and began to upgrade his body as if it were a machine. It was a long, painful process, both mentally and psychically. In the end, he sacrificed his humanity for power. While the Iron Cat is a hero, he can be unpredictable, known to fly into blind rages or malfunctions. Hopefully it was worth it in the end.
-
Whew, finally done. Worked all week on this (Except the first three days, since the contest just happened to start when I was out of state

) and then when it was time to submit.. I hit the wall of ambivalence. Hard. Anxiety's a crazy thing. This contest was really fun though. Thank you for hosting it, BD, and everyone who entered for displaying your talents. ^3^

Looks like I got no chance of winning, so best of luck to everyone else who has entered :3
Avatar by http://www.furaffinity.net/user/siriusdog
Top 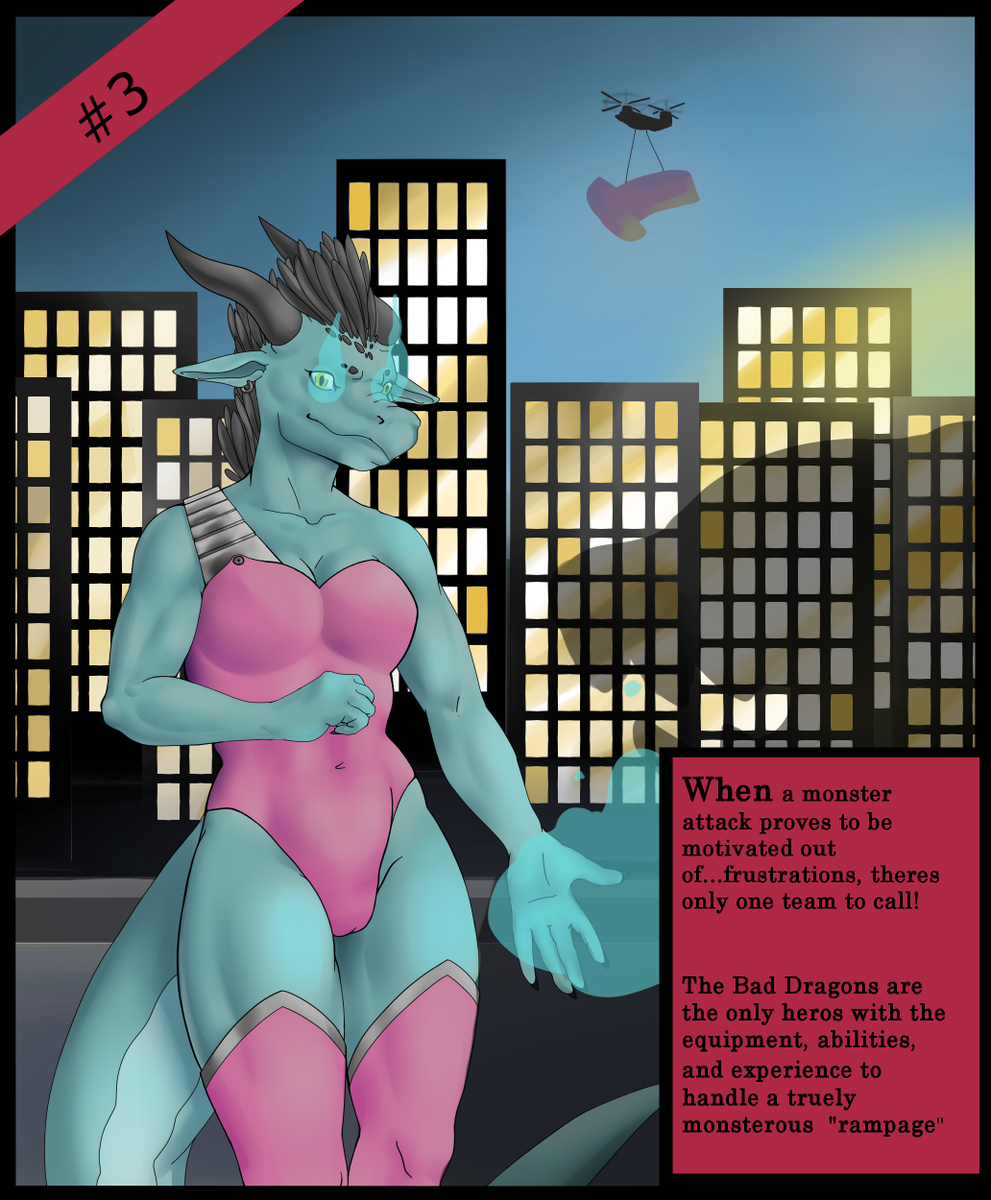 Maaan I had a lot of things go wrong making this but if I don't enter now I don't enter at all! Ill get the hang of digital art one day

So, just 3 hours left to submit, and then voting begins! At least, according to the promotion page. I wish the best of luck to everyone who entered(and have yet to enter #notoveryet). There's been some really great entries by some very talented people.

Personally, I'm going to sit this one out. I simply lack the artistic talent right now to get my project to a point I'd feel happy about submitting, so maybe next time.

Check out my weekly toy design thread The Vallus Creation Compilation.
This week's creation - The Two in One Cock-Tail Special
Top

awesome stuff. wish i had time (and a little more skill xD) to put an entry in but these all look great.

with Duke the leader and his power of super perception he can see and hear anybody's move before they make it.

Ridely the cosmic crusader. This super powered alien uses the power of the cosmos for telekinesis and flight for those super hard to reach items.

Flint the shrinking stud with the ability to shrink to any size but get stronger the smaller he gets to pack a pint sized punch that will knock the socks off of anyone.

And the witty Fenrir the lighting wolf he can reach speeds faster than light perfect for his playful pranks and witty one liners.

Together they fight the forces of evil and bring justice to the world.

“can it sparky! duke learned his lesson the last time he did that....but my head hurts as much as his crouch must of. Dukey what the heck happened?” Janine moaned in pain

looking around duke tried to see what was going on. Try as he might he couldn't see anything like he used to. He contemplates this conundrum thinking what has happen when flint confirms his worst fear
“what in the name of raptor Jesus is going on I cant shrink”

it was as he feared something is taking their powers away and they are sitting ducks.

“well lets be glad Ridely went to his home planet last month to learn more about how our powers work he should be back soon lets hope he makes it in time” Janine said optimistically
suddenly the team is slightly lowered and a laugh can be heard echoing around the room. As the echo moves lights turn on to illuminate the room revealing a factory producing the same green gunk that that lies underneath our heroes with the crescendo of it all ending with the lights revealing a masked stranger in leather amour covering his body from head to toe.

“well well well looky what we have here the dragon force all tied up and helpless!” exclaimed the masked stranger

“so you were the son of a bitch that sent us that threat to make us come out here the first place!” yelled flint

“yes that was me and it's also me that is sapping your annoying powers anyway making you weak as babes.”
said the masked man bragging

“well it doesn't take a genius to know how its this damn goo so are you gonna explain it or give us a BDMS exhibition.” quipped fenrir

“ok wise guy since that xeno will never find you in time let me explain what this is. You see my organization has been following you for some time now and we just hate what you do. So much that we spent 20 billion dollars to find a way to kill you guys seeing how siliconium infused beings are extremely resilient”

“ugghh were did you put it?”

“i put it in one of your piercings”

“but the only thing I have pierced is my..... when we get outa this we are gonna have a huge talk about boundaries”

“So any last words dragon FARCE?”

“well that's all good but the job isn't over yet!” yelled duke

“were not gonna make” said flint

Users browsing this forum: No registered users and 0 guests