Reviews for any and all Bad Dragon toys belong in here!
Forum rules
Post Reply
1 post • Page 1 of 1


Ordering (7/10): Ordering was simple as always, but with the whole “We only open customs every once in a while and won’t tell you when they’ll close” it’s kind of nerve-wracking. I almost got my first toy from a drop due to sheer impatience (I haaaate waiting) but I didn’t see anything I was 100% happy with.

Shipping (10/10): I ordered my toy on Friday January 8th and on January 20th the status changed from “Order Accepted” to “Shipped” which was surprising! My last order from two years ago was ready after only 12 days, but I definitely didn’t expect it to happen again. It got here on the 25th in perfect condition!

Unboxing (10/10): I was so impatient I unboxed it immediately in the bathroom! It was covered in brown packing paper and decorative packing paper with little dicks and wine glasses on it. My bottles of lube were all laid out next to each other and there was a fancy little care sheet and a free 2021 sticker too!


I will say though, one of the lube bottles (I only checked one) had broken open a bit. There wasn’t a huge mess or anything, just a bit of dried lube on the bottle and the bag that Elden was in. I’m assuming it was due to the cold?


On the bottom of the box was my toy and ohhhhhh my God. I knew this toy was going to be massive and I most likely wouldn’t be able to take it in it’s entirety (at least not any time soon) but I’ve loved this model ever since I found Bad Dragon many years ago.


I have an extensive wish list but Elden doesn’t seem to be the most popular model and out of fear of Bad Dragon retiring it I decided to go ahead and order one sooner rather than later.


I ordered Elden in one of their new “Princess Fade” colors, Angelic Mist. I’ve seen pictures of customs with really janky fades but mine thankfully turned out very nice! 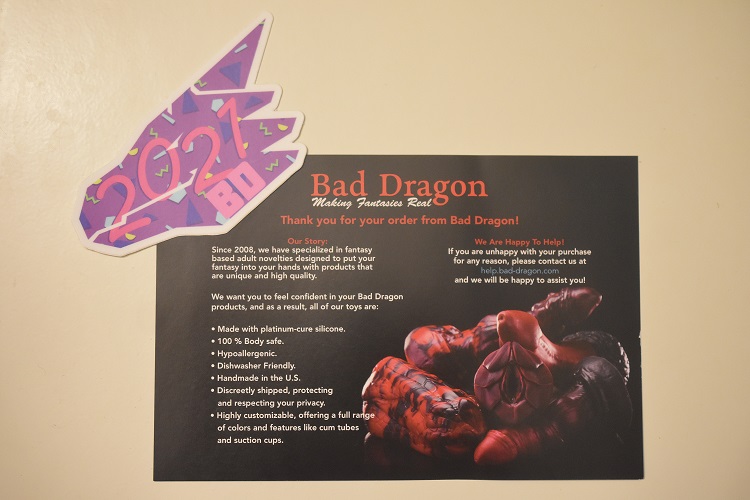 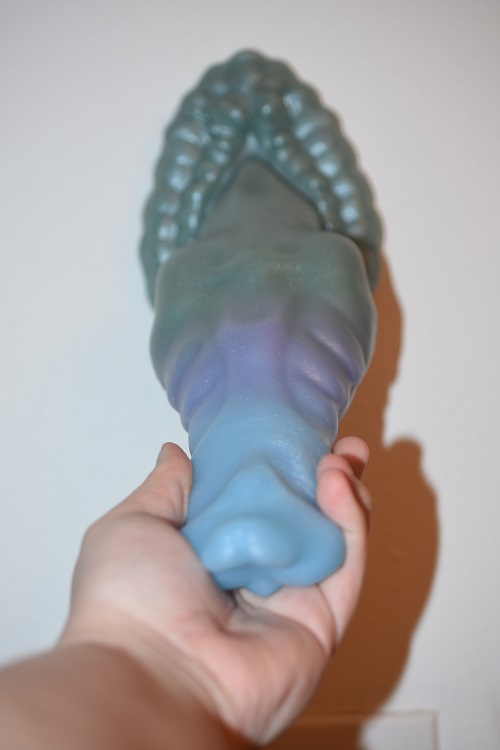 In Use (Vaginal) (5/10): After reading the few reviews of large Elden I could find, I decided to order him in medium firmness. Usually I order larger toys in soft, but after being a bit disappointed with my medium soft Flint I decided to try medium since one review I read described large firm Elden’s knot as being like a rock.


After getting into the shower and lubing him and myself up, I began the process of getting him in. Since he’s so long it was actually quite difficult to get into a position where I was above him, but eventually I got him bent enough that his head popped in.


I tried to ride him, as I generally do with large toys, but due to his length I wasn’t able to lift up and down very much while I was on my knees, and I didn’t want to risk squatting and slipping. I ended up sitting down and thrusting him in, holding him at the base of his knot.


Maybe I should just rename him from “Elden” to “Awkward Angle”. Anyways...


I managed to thrust him in a way that had his shaft sort of bending inside of me so that his head was driving right into my G-spot. Using him was kind of painful, despite his fat knot bumping into me and preventing him from going deeper, his shaft is still long enough that his head can hit my cervix which isn’t very pleasant.


Honestly, I think the inside of my vagina is just sort of numb to texture and doesn’t really feel it very easily. I always hear others talking about how they could feel every ridge and bump of their toy but even in medium firmness Elden wasn’t firm enough to make me feel anything besides “Yep, there’s certainly something in there”.


Overall Elden is a decent toy. I can't see myself using him very often but I love him aesthetically and it's hard to regret buying something so pretty!
Alex | Female | 21 | Bi | Furry | Toy list on profile
I may not be very active on here so if I don't respond or suddenly disappear I apologize!
Also, please no random PM's, thanks!